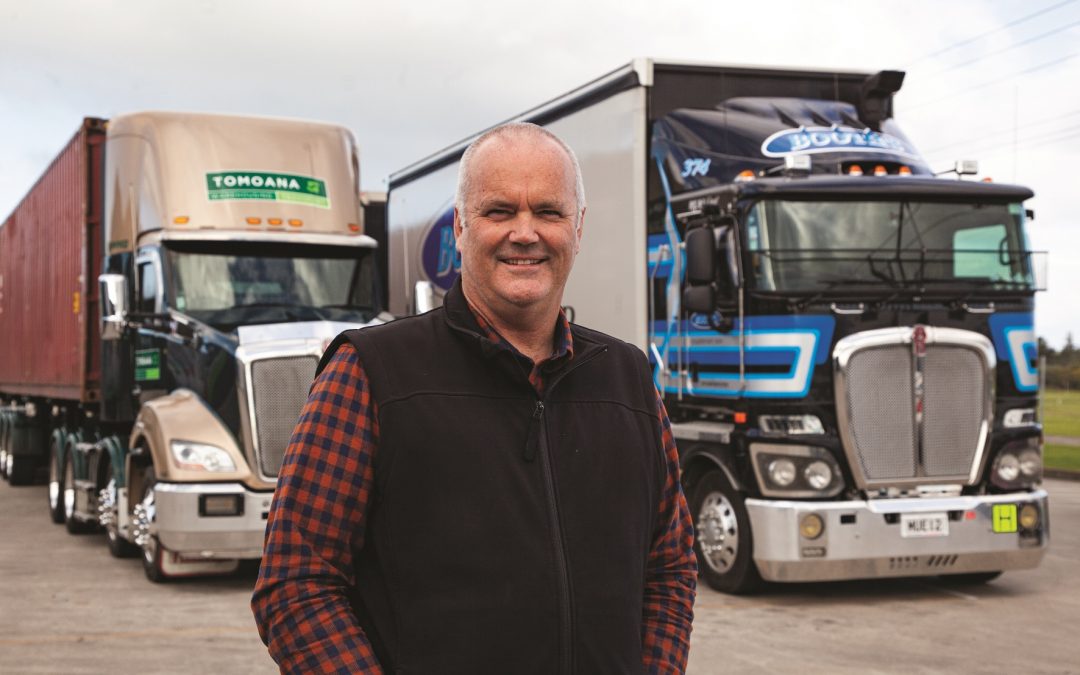 On October 31 2019, Booth’s Transport Ltd took ownership of Tomoana Warehousing Ltd in a move that had the New Zealand transport and logistics industry talking. Coming up to a year down the line, we sat with Booth’s Group executive director Trevor Booth to find out how things are getting on.

In many ways the Booth’s acquisition of Tomoana was a no-brainier; synergistic, as Trevor describes it. For Booth’s, it was an opportunity to expand the business into a more holistic service offering by adding Tomoana’s warehousing and container-focused services to Booth’s transport portfolio. This was a naturally attractive aspect of the acquisition, as well as Tomoana’s geographic and well-regarded establishment in the Hawke’s Bay.

Trevor explains that the tow companies were not strange bedfellows, as they’d worked alongside one another for a number of years and on various joint projects.

“For us, a lot of the real exciting opportunities came with being able to further extend our customer base. Prior to the acquisition we had a very limited crossover of customers, so it wasn’t as of we were buying a business that we already had customer relationships with,” Trevor says. He adds that they have since taken on a series of customer projects that have called on the whole range of services presented under the wider Booth’s Group umbrella.

And yes, Booth’s has done what it promised a year ago and intentionally kept the identities of the two companies separate. “We felt that Tomoana had a lot of brand equity, and we didn’t want to come along and start rebranding and changing things from that perspective,” Trevor explains. He’s quick to add what has happened however, is the application of the newly established Booth’s Group parent structure and the binding together of all companies under the new ‘Can Do. Will Do.’ positioning statements and instilment of the company values across all entities and their respective teams.

Behind the scenes there has been a lot happening. “We’ve been focusing on our core service offerings and looking for ways to capitalise on the strength of each business.” Trevor says that the business direction and service offering for Tomoana was examined in detail and a lot of time was spent analysing all facets of the business before any significant changes were made. This process eventuated in some divisions of the business that weren’t core to warehousing, containers or general freight being divested, particularly logging and heavy haulage which Tomoana had started to venture into.

In addition to this, we have been hunting for opportunities to align the two businesses’ systems and processes to set ourselves up for the future and strengthen both companies. Our attitude is to be continuously improving, so we have been throwing processes and procedures back and forth between Booth’s and Tomoana to expedite improvement as quickly as possible. We’ve now got a ‘Working-Together’ group in place where key personnel have regular meetings to assess possible alignments.

It’s very much a collaborative approach to make sure we get it right and do not force one culture on the other. The whole process has been about making the entire organisation better and stronger, rather than change for the sake of it,” Trevor says.

Encouragingly, Trevor says that staffing has remained largely untouched. “When something like this is done with two medium-to-large sized businesses, often headcount is reduced. But some functional areas of the two businesses were under-resourced already, so where required we have looked for ways to move staff internally and/or create new roles to plug any gaps. Across both companies, we felt we had an opportunity to better capitalise on key staff members who we believed had underutilised capabilities.”

In October 2019, there were no indications of what was to come in 2020, and the tumultuous period brought about by the Covid-19 pandemic was certainly not ideal timing. However, Trevor says “even in this difficult situation, the companies have been able to pool resources in a coordinated and efficient way without recreating the wheel”.

“We could create one message and go for it. We were able to be dynamic and agile, especially from a driver perspective, where we could be more strategic given the driver shortage in the industry. We also created better utilisation of our gear from a wider network point of view.”

All in all, the synergies between Booth’s Transport and Tomoana Warehousing seem to have brought about definite benefits for businesses, working as one across multiple sectors of logistics. From their customers’ perspective, says Trevor, feedback has been overwhelmingly positive. “It’s been quite an easy one to describe to customers, It’s not as thought we’ve suddenly taken out a competitor in one particular sector, so they’re not faced with less choice. Rather, they are complementary services that offer customers greater scopes for efficiencies and ultimately increased benefits.”